The Best Places to be on Easter Sunday in London 2022

There are some uplifting deals this Easter when it comes to weekend breaks – for the whole family, for two, or even just for one. And quite a few reasons why you might opt for a holiday close to home.

The travel world is quick to respond to change, none more so than 5 star hotels in London. We know that there’s an uptick in solo travel, for the individual who wants to venture onto the streets and drink it all in. Tower Suites’ boutique apartments offer a sense of home, and are close to local life (like Borough Market) and famous landmarks. Plenty to savour.

Or if you prefer to relax and unwind, there are revitalising treatments from Adamo Spa, nestled inside Tower Suites itself. The Blue Orchid hotel deal for two offers Swedish full body or deep tissue massage, dinner, and room service breakfast. Perfect for romantic weekends.

There is also plenty to savour at #LondonLoveAffair with some of London’s most loved spots to explore.

Royal Time At The Tower not only provides the best views of London’s iconic 11th century fortress, it offers private walking tours of local landmarks and exclusive tours of the Tower itself. Our luxury hotels in London keep you close to the heart of a beguiling city.

Discover a different version of London on foot. This adventure game delivers cryptic clues to your phone and takes you (and your friends) through the streets and buildings of London. Solve riddles and challenges linked to the surrounding streets. Three games on offer, pub stops optional.

A clay shoot in the City of London? This enterprising bar offers cocktails, food, music – and competitive clay target shooting via its massive interactive screens. The hardware may look and feel authentic, but strictly no projectiles. Book online for a session. Groups of 2 to 20.

Whereby you are transported to Mayfair during the Blitz in 1940 – but there’s a fracture in time and space, and you, dear reader, have to protect the planet. It’s an immersive theatrical experience from the magnificent team who created The Great Gatsby show in London. Two hours running time. Interact as much or as little as you like. Bond St tube. You know you want to… 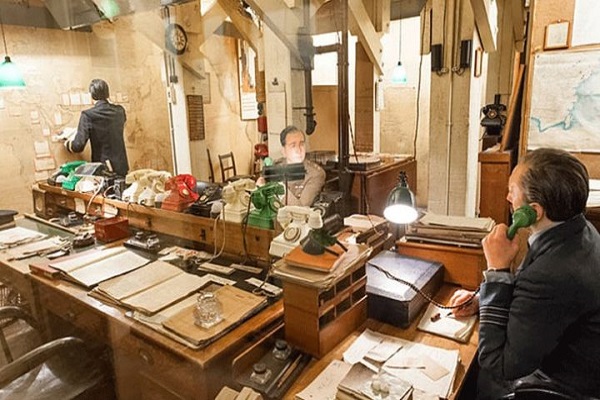 Around the corner from 10 Downing Street, St James’s Park and Horse Guards Parade is the Churchill War Rooms. Part of the Imperial War Museum, this underground maze was the real centre of UK operations during WWII. Books, maps and calendars left in place since the last time they were used in August 1945. We expect someone has dusted since then. Clive Steps, King Charles Street, SW1.

This ship that has an 80 year history, including WWII Arctic convoys and D Day landings. It takes about 90 minutes to walk around the many decks of this floating museum. It’s moored close to Tower Bridge, and not far from Shakespeare’s Globe, Tate Modern and Borough Market. Sit in the captain’s chair or explore the engine rooms, or the crowded living quarters. Interactive games throughout.

All Aboard A Hot Tub

A hot tub IN the water. That you can steer. With refreshments. Delightfully James Bond, c.1978. Hot tub boats from Scandinavia, embraced by gleeful visitors to docklands, whatever the weather.

This highly popular show continues into next year - due to public demand. Tate Modern has announced a massive extension, until 2023. No VR headsets, just mirrors and the human eye. Astounding.

For 20 years Raphael dominated as a painter, architect, archaeologist and poet. He died young but his work shaped Western culture. Loans from the Louvre, the Prado Museum, the Uffizi, the Vatican and the National Gallery of Art, Washington. This is a once in a lifetime show. Main galleries free. Raphael admission charge.

From the blazing turmoil of Francis Bacon’s studio to the cool paintwork of “The Platonic ideal: Studio Interior” by Wilhelmina Barns-Graham, the immersive headspace of the artist is every bit as compelling as any interactive game. There is even a reconstruction of Matisse’s bedroom/studio (sadly, minus the cats he loved). Film, photos and painting. Fascinating.

If you are quick, you can catch the last day of the RA Francis Bacon show (ends on Easter Sunday). From his earliest works to his last painting, Bacon’s powerful amalgam of anguish and vitality, raw human and raw animal, is unflinching.

The Passion of Jesus

As Good Friday is a bank holiday, we thought we’d mention the annual re-enactment of the last hours of Christ from the Wintershall Players. All in Trafalgar Square, in front of the National Gallery (and up Pall Mall from Buckingham Palace). Features 100 actors and volunteers, plus horses, donkeys and doves. Two 90 minute live performances at 12pm and 3.15pm. Deemed PG.

This show focuses on the impact of our species’ need for food, energy and materials, and its cost to the natural world. The full title of this show is: Our Broken Planet: How We Got Here and Ways to Fix It. The museum employs 300 scientists. More than a display of old bones.

How to turn a display of old bones/stones into an art form: The British Museum represents many things to many people, but it never fails to inspire reverence for the deep past. The public galleries are free, but the current special exhibition, The World of Stonehenge, continues until 17thJuly and has an admission fee. This icon of Britain’s archaic past has won five star reviews. Great Russell St, WC1.

You can find this aquatic world on the ground floor of County Hall, near the London Eye and the South Bank Centre. Opens daily (10am till 5pm on Sundays). Shark Walk and Penguins, 7,000 creatures of the deep.

Land of the Lions

Historic and nature–inspired guided walks and activities in the Royal Parks of London: discover St James’s Park; the hidden history of Hyde Park; bat tracking in Kensington Gardens. Take in the sights of Westminster and Buckingham Palace; or Kensington Gardens, the Serpentine Gallery and Hyde Park. Walk for free across acres of greenery. Self–guided or structured, it’s a delight.

This is a website that encourages you to explore the ancient parishes of the City of London, with free downloadable guided walks following ancient church buildings and parishes in the City. Also collectable cards, books, maps and explorers’ walks. Although half the churches in the City of London were lost to fire (1666) and war (1940), there are still 40 left in this compact space.

Michael Duncan is a well known Westminster Guide. His walking tours take in the elegant delights of St James’s; reveal 300 years of bohemian Soho history, and the women who helped shape this quarter; a “suits and boots” tour of Savile Row. Follow the link and look for more. (£12)

Track 19 artworks in the City of London’s financial district. Sculpture in the City is an annual urban sculpture park that uses the streets and public spaces as a rotating gallery. A self guided display of contemporary art, some discreet and thoughtful, others (like Harlequin Four by Mark Handforth) highlighting the mix of contemporary and historic buildings nearby. Look out for Cosmos (Eva Rothschild), Latent Space (Jake Elwes), Bloom Paradise (Jun T. Lai), Symbols (Guillaume Vandame) and Murmurs of the Deep (Laura Arminda Kingsley). See for yourself.

Whether your focus is with the City of London or the Royal Parks near Buckingham Palace, Blue Orchid provides the best hotel deals in London, and the perfect base from which to explore.

Choose from Tower Suites to the East, with views of Tower Bridge and the Thames, or Westminster’s Wellington and Rochester Hotels, both on leafy Vincent Square SW1. Among the posh hotels in London, they form the perfect base from which to explore the past and present of a great city. Life as it was, and as it’s lived now. Always changing, always the same.