Lighten Up: Things to celebrate in London this Winter

Here in the Northern Hemisphere, when the days shorten we take steps to rekindle the light. Whether it’s with pumpkin lanterns on the doorstep, an organised firework display or a high street bristling with elaborate fairy lights, the aim is to celebrate, not hibernate.

Diwali, Christmas, or Chinese New Year: London is aglow during the season of ‘sundown at teatime.’ Nature sleeps but this great city knows how to party. Time to start planning for a little “me” time, especially after the last two years.

Actually, there’s no such thing as “off season” as far as London is concerned. All year round it offers a carousel of indoor and outdoor events and sights. From the Tower of London to the Houses of Parliament; from a twilight tour of Drury Lane Theatre (the most haunted in Theatreland) to the bustle of the South Bank; whether it’s a tour of Sherlock Holmes’s Baker Street house or a Soho cocktail bar, London is a treasure trove of both DIY sightseeing and well organised tours.

In fact one of the easiest ’self-guided’ circuits you could do this year would be to start near the Tower of London and Southwark with “Christmas by the River” – traditional chalets that line the river bank by London Bridge, packed with original presents, handmade crafts and snacks and great views.

From there cross London Bridge to Bankside and Tate Modern – open Sunday to Thursday 10am–6pm, and Friday and Saturday till 10pm. Plenty to see there, and a great building anyway, but if you are lucky, you’ll bag a return ticket to the sold out till next Spring light fantastic that is Yayoi Kusama’s “Infinity Mirror Rooms” at Tate Modern. Meantime, here’s one of the awesome pictures that flooded Instagram earlier this year. 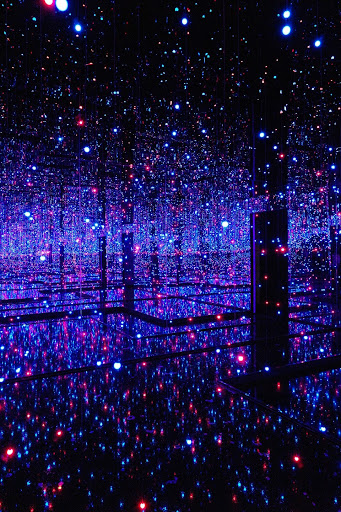 Further on from Tate Modern is the Millennium Bridge and St Paul’s Cathedral.

Or you could stay on Bankside and take the kids to see a wonderful retelling of Hans Christian Anderson’s ‘The Fir Tree.’ Not for the faint hearted though, as this tale is told under the stars at Shakespeare’s Globe, next to Tate Modern. Hot chocolate or mulled wine to keep you warm. Tickets for the groundlings (standing only) are still a mere £5. Theatre as it was staged in the Bard’s day, open to the skies.

While there’s no Tower of London ice skating rink this year (because of top secret work currently underway around the moat area, to be unveiled in 2022) nearby Canary Wharf on the Docklands Light Railway and Jubilee line has reinstated its ice rink. Canary Wharf at night, with its forest of docklands skyscrapers that light up the black sky is a visual treat all of its own.

And the 1000 year old Tower is one of the most extraordinary historic monuments in the capital. A UNESCO world heritage site, with an army of Beef Eaters eager to take you on a tour of this huge fortress. This is where two of Henry VIII’s wives lost their heads. So, after you’ve visited the Tower, perhaps you could take in “Six,” a musical about Henry’s six wives at the Vaudeville Theatre (until Dec 1 2021). ‘Divorced, beheaded, live!’ goes the ad campaign for a show that dishes the dirt on Henry.

In case you think that all central London hotels will wipe you out financially, there are some very good value deals for short breaks this year, which backs up the view that London is the place for Christmas getaways in the UK.

Sunday Fundays at the Tower Suites London is a case in point. Breath-taking views of Tower Bridge and the Tower of London; one or two night stays; a three course meal and breakfast; fully equipped boutique apartments that would suit adults and children alike; perfect for any celebration – a great romance, a family get together or a girls’ night in (or out).

There are quite a few theatres open on Sundays too. The really useful thing about a Sunday theatre performance is that they mostly take place in the afternoon. So you can stay at a hotel with friends and family and still have Sunday night to relax or dine out, ready for Monday.

“Frozen,” “Matilda,” “Harry Potter and the Cursed Child” and “The Lion King” are great for the kids and all offer Sunday performances (although the Lion King finishes on November 30 this year).

Some of the more interesting adult Sunday performances include a handful of ‘interactive’ or ‘immersive’ versions where the audience is part of the staging. No fourth wall, here…

Included in this category is an immersive version of “The Great Gatsby” (advertised as taking place in Gatsby’s Mansion, via Immersive Live). There’s also an adaptation of Jeff Wayne’s “The War of the Worlds,” which places you inside the action with live actors. The 8 to 12 tickets per performance adventure begins under a giant Martian fighting machine on Leadenhall Street…..

Also said to be immersive to some degree is the smash hit “The Play That Goes Wrong” in which a college drama society presents a 1920s murder mystery. The result is akin to Agatha Christie performed by Buster Keaton.

“Jersey Boys,” “The Drifters Girl” (featuring Beverley Knight) and “Get Up, Stand Up” (Bob Marley tribute) are the Sunday musicals on offer.

The great thing about central London is its compact nature. Covent Garden, Theatreland and the best of retail therapy are all within easy reach of any central London hotel, and there’s always the London Underground network.

Also worth noting are the central London hotel deals that take place in the sightseeing hotspot of Westminster (Buckingham Palace, Big Ben, Westminster Abbey and across Westminster Bridge, the London Eye and South Bank Centre).

The South Bank sees the return of its famous Christmas market, plus “Circus 1903” at the Royal Festival Hall (till January 2nd 2022). Daredevil thrills from this recreation of a fin de siecle circus.

Further towards Westminster Bridge in County Hall there’s an immersive staging of Agatha Christie’s “Witness for the Prosecution” where the audience sits in the courtroom with the action taking place around it. (No fidgeting or you’ll get done for contempt of court…)

Up the road in Leicester Square there’s an illuminated path of larger–than–life wands from the Harry Potter films (can you tell your Hermione Granger from your Sirius Black?). This installation accompanies the release of the new Fantastic Beasts film.

And for the grown ups, Leicester square hosts the Spiegeltent cabaret show once more, the Olivier Award–winning extravaganza that started out at the Edinburgh Fringe and just keeps growing. Old favourites, new acts from La Clique. Tickets have to be booked beforehand these days, and do check whether you need proof of a negative Covid test or proof of vaccination for all theatres.

When it comes to festive lights, the best displays are generally found in Regent St, Carnaby St, Covent Garden and Bond St. The latter has a tradition of displaying the prettiest peacock designs, in honour of the 18th century lads known as the Bond Street Loungers who once hung out there, the fashionistas or peacocks of their day.

Trafalgar Square, of course, displays its festive Christmas Tree from Norway, and supplies an endless stream of carol singers. Hyde Park Winter Wonderland is back with all its rides, games and shows, but you have to book entrance tickets in advance.

Finally, December doesn’t feel normal without a party of some kind. Whether it’s the office get together, a family reunion (after two years of separation), or even a Winter wedding, a missed birthday or a late graduation ceremony, there are some really tempting top London hotel deals right now, featuring some exquisite venues for UK Christmas breaks.

Blue Orchid has flexible spaces in its Westminster hotels that can offer Edwardian grandeur with arts and crafts flourishes, and a vaulted chapel with Juliet balconies, all within walking distance of Buckingham Palace. As well as restaurants, bars and assistance from the experienced and attentive Blue Orchid staff, including a concierge and a wedding planner.

Tower Suites London has a 50 metre roof terrace overlooking the Tower of London, Tower Bridge and the Thames, as well as many contemporary spaces suitable for corporate or personal use with the same breath-taking views.

Guest rooms, dining and drinking options, private gardens, luxury spas, beauty, hair and male grooming services as well as access to a gym and personal trainer if required. Perfect for any occasion.

So whether you are planning the office party, a champagne moment, a short break or a Harry Potter afternoon tea with the kids, Blue Orchid Hotels can help you celebrate. Your celebration might take two weeks, two days or just two hours, but the location, the ambiance and the service on offer in the heart of one of the world’s great cities will build memories to last a lifetime.