One of the big advantages of a city centre hotel is that it means less time and less money spent travelling to the best sights and venues.

But why Central London, you ask? Let’s start by saying that London is greener and more pleasant than many other megacities. When it comes to green public space it’s ranked ahead of New York, Berlin and Paris.

Many of our public parks are also cultural and historic hotspots. Buckingham Palace is inseparable from St James’s Park and the Mall; The Serpentine Gallery is in Kensington Gardens and the Royal Albert Hall overlooks it; London Zoo borders on Regent’s Park. The city’s plane trees and green squares are a big part of its appeal. It’s one of the reasons why visitors choose affordable luxury hotels in London.

It’s also a wonderfully diverse city. Over 1,000 languages are spoken by Londoners, and the resultant mix of cultures and cuisines means you can eat your way round the world in a handful of days, with everything from high table to street food on offer, all year round.

But the big draw must be the history and the compact nature of this town. London was made for walking.

Close by the Tower of London, the contemporary chic of Tower Suites with its boutique apartments, rises up out of the most ancient part of the city, surrounded by a treasure trove of historic buildings and vivid legend, plenty for any visitor to explore.

Tower Suites London can offer luxury overnight stays, as well as relaxing, health–oriented overnighters that take advantage of the Adamo Spa range of beauty treatments and massages (and not just for ‘his and hers’ or romancers).

Next day, enjoy a relaxed breakfast before you head out to explore this wonderful part of the city.

The all–apartment nature of Tower Suites also makes it the most versatile Tower hotel in London, handy for the business traveller and long stays. It boasts some of the best luxury meeting rooms in London. 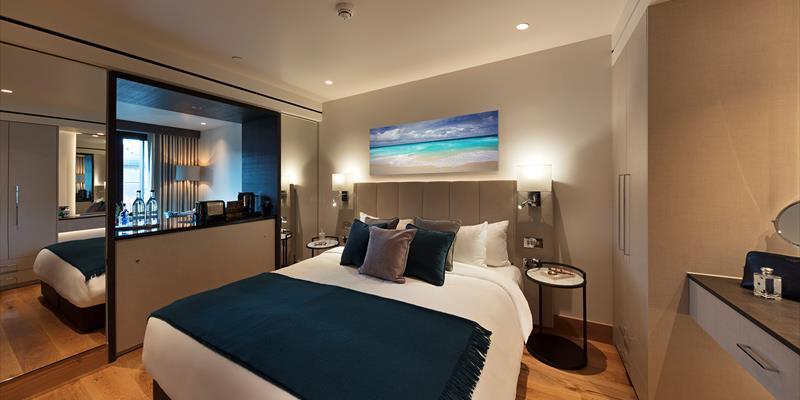 As for the location of Tower Suites, the Thames path between nearby Tower Bridge and London Bridge is a riverside stretch called the Pool of London. It happens to mark the original – and pagan – Roman port of the Thames on the north bank.

In fact there was once a temple to Mithras near the present day Bank of England; a Roman Forum for socialising and a Basilica for administration near Gracechurch Street where you’ll find beautiful, ornate Leadenhall Market with its shops and cafes. This is a very watery part of town, steeped in history, and to this day it has a mysterious allure.

From 100 Minories, where Tower Suites is located, follow the West outer wall of the Tower of London down to the Thames Path. From here you follow the river to London Bridge.

But if you want to explore some more, just as you reach London Bridge, turn right up Fish Street Hill. At the top you will discover The Monument: it commemorates the start of the Great Fire of London in 1666.

From The Monument you are close to Gracechurch Street and Leadenhall Market.

If you turn back towards London Bridge (built in the 1970s), be sure to cross the river to the South bank. From here you are a stone’s throw from Southwark Cathedral, Bank Side and Shakespeare’s Globe Theatre, plus Tate Modern.

Walk across the Millennium footbridge in front of Tate Modern and you’re faced with St Paul’s Cathedral. The dome is among the tallest in Europe, which explains why even in this century it’s so visible.

Or stay on the north bank for one of the best and biggest Victorian Market Halls, the historic Spitalfields Market, close by Liverpool St Station.

If you crave a great view, then Tower Suites Skyline rooftop restaurant and bar has magnificent vistas of nearby Tower Bridge, the Tower of London, and the city skyline. A relaxing way to celebrate the labyrinthine delights of this part of town and its ancient, enterprising energy. 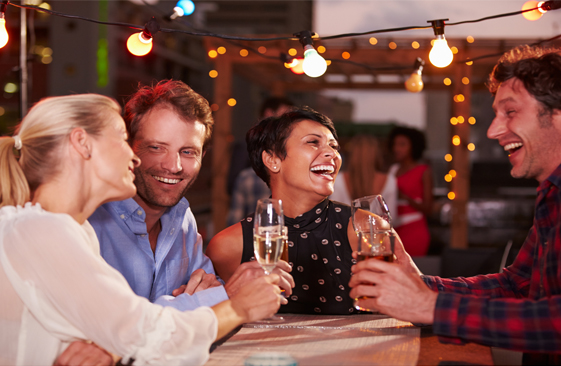 On the other side of town there are some equally irresistible offers from Blue Orchid’s Westminster Hotels, the Wellington and the Rochester, both located on leafy Vincent Square, a stroll away from St James’s Park and Buckingham Palace.

Like Tower Suites, these hotels offer a range of short stay experiences to set you up for the coming week, as well as long–stay breaks and business deals.

The Rochester and the Wellington are halfway between Westminster Cathedral in one direction and Tate Britain in the other. It’s about a 15 minute walk from Vincent Square to Buckingham Palace and St James’s Park, at the top of which is Admiralty Arch and Trafalgar Square.

The nearby Royal Parks in the centre of town can make for a great excursion. St James’s Park alone boasts 57 acres of parkland, plus cafe, food kiosks, Horse Guards Parade, The Mall – and a big lake with lots of birdlife, including pelicans (introduced in Charles II’s day about 400 years ago).

Behind you is the The Mall and beyond that Nelson’s Column and the West End.

That’s a lot of green space for a metropolis. But the Buckingham Palace hotels are also close to Victoria Station (mainline and underground), which is itself an area that has undergone a lot of interesting changes in recent years.

The Market Hall Victoria is a Victorian food court and rooftop terrace. A stone’s throw from Victoria station and a favourite with locals and visitors.191 Terminus Place, SW1.

Westminster Cathedral is an impressive neo Byzantine Catholic Cathedral, with its distinctive red and white brick exterior. The mosaic and marble interior seems to go on forever. Two minutes from Victoria Station.

Eccleston Yards: post-industrial warehouses, complete with cafes, bars, studios and independent small businesses. It also has an outdoor yard with picnic tables and seats, murals on the walls, pop up events, and a Sunday farmers’ market. Seven minutes walk from Victoria Station.

Also within the ambit of the Westminster Hotels is the famous Saatchi Gallery with its trademark contemporary, eye-catching shows. Duke of York’s HQ, SW3.

Right in the centre of town, is our famous West End, with its discrete pools of activity. Soho and St James’s are recognisably distinct, but the area as a whole has a compact, magnetic quality that makes sense.

The second largest metropolis in Europe, the centre of London is actually quite human in scale.

But for anyone who likes panoramic people–watching combined with historic buildings, the London bus offers a window on some of the best free activities in the capital – Westminster, Covent Garden, St Paul’s Cathedral, the museums, the shops.

Two of the most enjoyable must be the No 11 and the No 9 bus. They also happen to be a couple of the most historic routes, first appearing in the 1850s. They take you through the centre of town from West to East and back again.

The No 11: Starting at Fulham Town Hall in the West and ending up at Liverpool Street Station, this grande dame of London buses takes you through Sloane Square before calling at Victoria Underground Station – by which time you are just a few minutes’ ride from Westminster Abbey and the Houses of Parliament.

The No 9: this bus route is comparatively small, but perfectly formed. It starts at Aldwych in the centre of town, then stops briefly outside Charing Cross Station, before continuing onto Trafalgar Square.

Next stop is the lower section of Regent Street/St James’s; then through Piccadilly Circus and on past the Royal Academy (that has to be prime sightseeing territory).

A couple of stops later you find yourself in Exhibition Road with three of the best known museums in the world – the most beautiful of which has to be the Natural History Museum. The Science Museum is made for fidgety youngsters, while the Victoria and Albert Museum has aesthetic excellence covered. 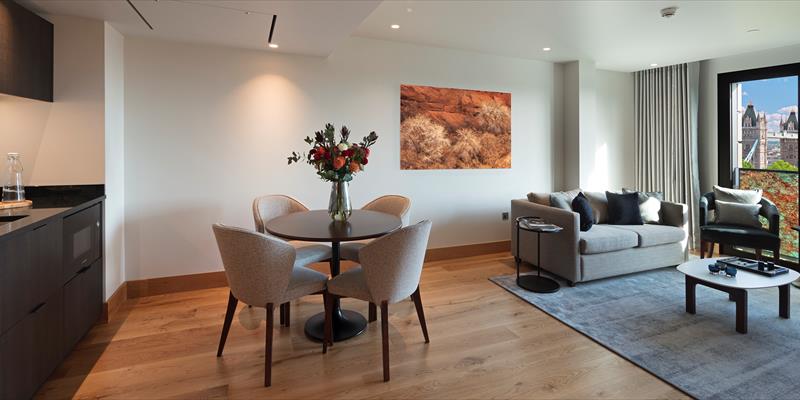 Tower Suites’ architectural style may be contemporary, but it occupies an ancient site. Overlooking the iconic Tower of London, this whole area grew up around the White Tower, founded by William the Conqueror in 1100. The Tower of London remains the best preserved medieval castle of any European capital.

The Rochester and the Wellington Hotels on the other side of town are close to equally high status spectacle like Buckingham Palace and the Changing of the Guards, as well as modest curiosities like the English Rose Cafe and Tea Shop, an English style vintage tea shop, independent and family run, also close to Buck House. Said to be good value too (especially full English breakfast, served until 12pm). Veggies and allergies catered for. Book ahead. Closed Tues and Weds, Lower Grosvenor Place, SW1.

When it comes to your London hotel booking, whether you choose the deep history of Blue Orchid’s Tower Suites or the allure of its Westminster Hotels, you can’t go wrong. Discover what else is on in London with #londonloveaffair.